While Arkansas plays in CWS, program’s future on display with Arkansas Sticks

EMERSON, Ga. — While the present for Arkansas is playing in a College World Series regional, there’s no question where the future is for the nation’s top-ranked team.

Twelve members of the Arkansas Sticks 17U Scout roster, which is playing in this weekend’s PBR Showdown at LakePoint Sports, are Razorbacks commits. Headlined by shortstop Jayson Jones, Prep Baseball Report’s ninth-ranked player in the Class of 2022, in all the army of future ‘Omahogs’ on the roster includes four top-500 players in the class in Sims (64th), Sean Fitzpatrick (117th), Cooper Dossett (293rd) and Reese Robinett (369th). It also boasts five of the top 12 in the state of Arkansas in Sims (first), Dossett (fourth), Austin Jobe (fifth), Jordan Huskey (ninth) and Jose Hyneman (12th).

There’s more than a sense that the Sticks are tied to the Razorbacks. It’s part of their very fabric, emblazoned on the side of their jerseys they are the “home of Arkansas baseball.”

“That program is definitely an established program that I love to represent, and I love to be a part of,” said Jones, the Braswell (Texas) product, who is the second-ranked player at his position among juniors-to-be.

It didn’t start as the mission for Chase Brewster when the coach founded the Sticks in 2017, but his organization has had 40 players pledge to the SEC power Razorbacks, with 16 in all among the multiple Sticks teams taking the field this summer.

“It happened organically and (Razorbacks coaches) coach (Dave) Van Horn, coach (Nate) Thompson and coach (Matt) Hobbs have been nothing but great to us,” Brewster said.

“It started with a lot of homegrown kids committing to Arkansas and then obviously when the out-of-state kids, like kids from Texas and Hawaii and Oklahoma that are committed to Arkansas and they want to play (for us), it’s just a really good situation.”

Jones is among those out-of-state players looking to spend the summer with his future college teammates. He had previously played for the Dallas Tigers, but friend and fellow Razorback-to-be Fitzpatrick had put Jones in touch with Brewster.

“I was like ‘Shoot, might as well get a connection with the guys,’ Jones said. “It’s a great team, they all play at a high level. … There’s a lot of Arkansas guys and I just wanted to get a connection and some chemistry with them.”

That’s a sentiment echoed by Sims, who said, “Being able to play during the summer with each other, especially all going to the same organization, like college or anywhere, it makes you feel like ‘Man, I get to go to college for four more years with these guys and become brothers with them, growing a family with them. That’s what’s most important.”
It’s not a roster exclusively made up of Arkansas commits. Justin Best, North Carolina’s top-ranked player in the Class of 2023 and 34th overall, is bound for Florida State, and there are more future Power-5 players in Blaise Grove (South Carolina), Noah Kang (Oklahoma), Austin Humpres (Arizona State), Tripp Landers (TCU), Traig Oughton (Ole Miss) and Tennessee commits Caden Marcum and Dillon Orr.

But those who have already verbally committed, and anyone still deciding on their college home, is getting an ear-full of the Razorbacks-to-be.

“We play a full-court press on those guys,” Jones said. “We see talent out there and we want them to be a Razorback. That’s all there is. They’ve got a great program going on, No. 1 in the nation and they’re doing great things there. Have to get the best guys going there too.”

Joked Best, who is in his first season with the Sticks, has clearly had his fill already “They’re always like ‘Hey, you’ve got to come to Arkansas. It’s a dream.’ But Florida State has always been my dream school since Day 1, so I would never de-commit or go anywhere else.”

The Sticks have put more than 250 players in college and had 17 MLB draft picks, but they’ve been seen as the unofficial feeder program for coach Van Horn and Co. That’s not just come from the sheer number of those it sent to Fayetteville, but with how early some of those commitments have been given.

Texarkana product Braylon Bishop was the first Sticks player to pledge to the Razorbacks before ever playing in high school, doing so in 2019, and has since been followed by 2022s Sims, Dossett, 2023’s Kyler Spencer and most recently, 2024 right-hander Ross Felder. Per Brewster, the Sticks currently have four ninth graders and two eighth graders with offers in hand.

“We want every kid to get into a better situation scholarship-wise and a better situation draft-wise. It would be a lot of fun to win a lot of tournaments this summer and all the glory to go to the staff and the program, that’d be great. But if the kids don’t see any benefits, they don’t see any offers, improving their status as an amateur and hopefully as a professional, it would all be for nothing in my opinion. We’re very excited for the guys that commit early and the guys that get offers along the way and hopefully some of these special players will have a chance to have their names called in July.”

While the Sticks continue putting on a show in the PBR Showdown — winning their first three games by a combined 22-7 — they’ll turn their attention elsewhere this weekend, as Arkansas continues its path to Omaha. That’s nothing Brewster or his staff have to plan for, that SEC future hanging there, after all, part of his team’s identity.

“I’ll say our parents planned (to watch) way before our schedule came out,” he said. “I’m sure our parents were hoping the Sticks and the Razorbacks weren’t playing at the same time.” 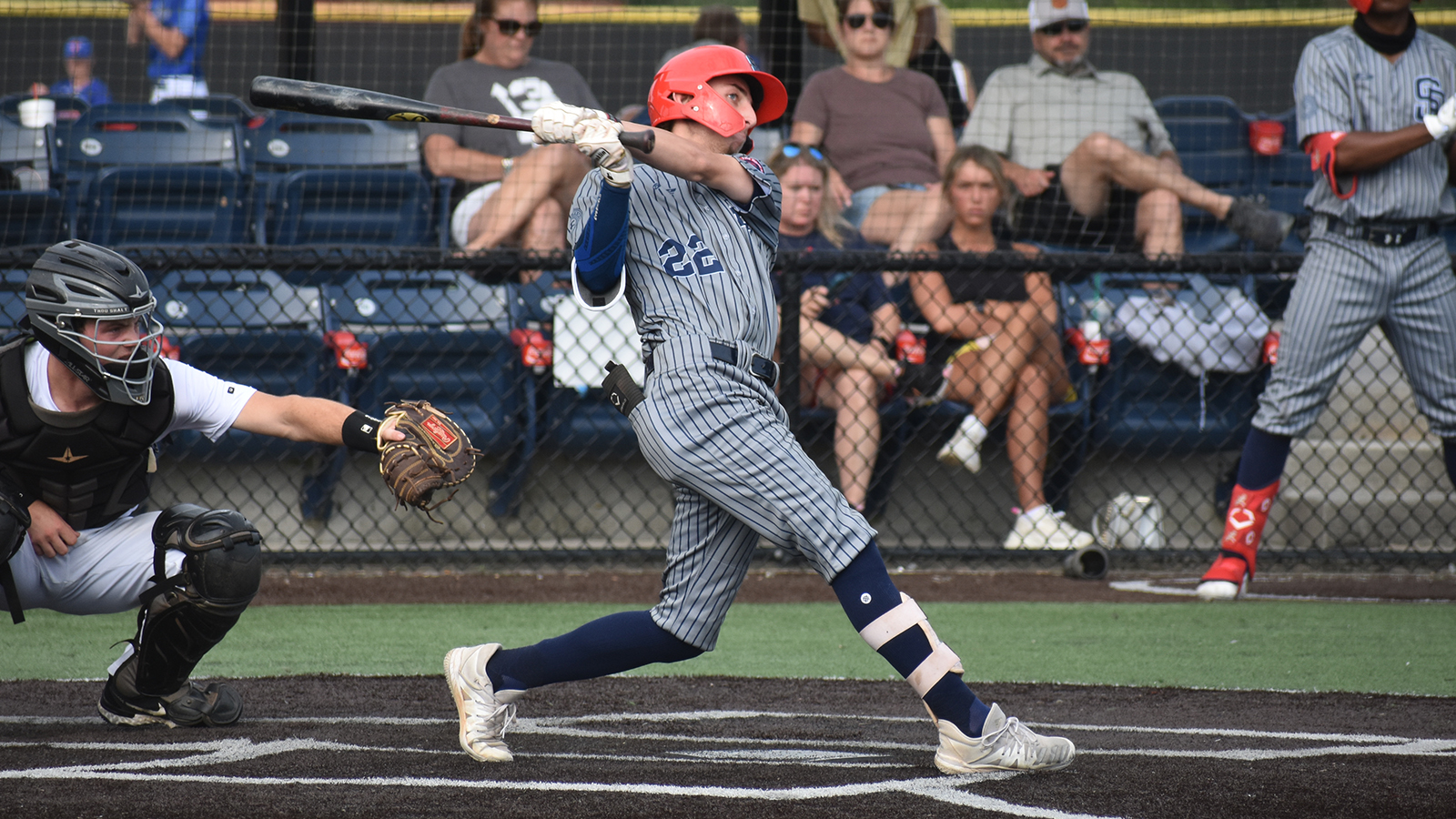 Colton Sims is one of five Arkansas Sticks players who committed to Arkansas before ever playing a game in high school.

Dayson Griffis, Georgia's 11th-ranked player in 2025, commits to Tennessee
K.J. Hart is just getting started as he develops into a two-way star for River Ridge
North Cobb OF Steele Ingram has opened eyes with his quick, easy swing
X